You are at Home Amalfi 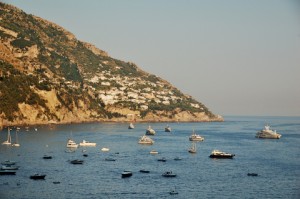 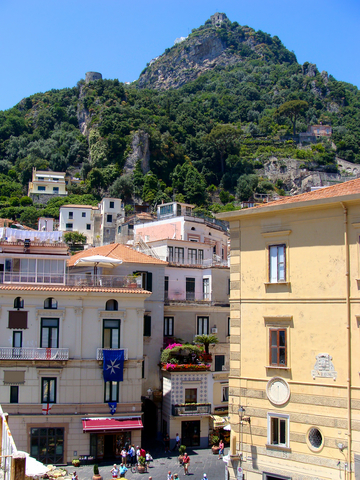 By Rosie McKechnie
The wrinkles crease, concertina-like, around Luigi’s sparkling eyes as he laughs, “Do you want to know why I love lemons so much? It’s simple, it’s because I was conceived underneath a lemon tree.”
His family’s lemon groves cling to the vertiginous hillside surrounding Amalfi and the 73-year-old has provided a working pair of hands here since he was eight. So it’s not altogether unbelievable when he smiles and proudly adds, “Lemon juice runs through my blood.”
It was four generations ago when Luigi’s family first started cultivating the citrus fruit in the fertile hills above, what was then, a tiny fishing village. The glory days of lemon production, when the prized fruit was shipped from Naples to destinations as far afield as New York and Moscow, are long gone. But there’s a reminder of how labour intensive farming was then with a display of tools and equipment down below on the street.
These days the fields are owned by a co-operative and the family’s 800 trees produce 250,000 litres of lemon juice a year. The only government-approved lemon co-operative in Europe, it oversees the back-breaking work of hand-picking the harvest. 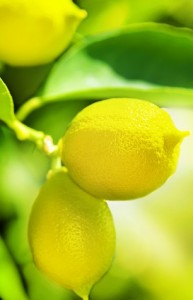 As we zig-zag up the steep path to get a closer look at the fields, I struggle to keep up with the sprightly septuagenarian. We squeeze past sturdy stone walls which separate the terraces and Luigi explains why Amalfi lemons are so special.  “The skin is thinner and rougher, but more importantly, these lemons have nine segments. They’re so big because they stay on the tree for nearly a year, protected by the mountains from storms and bad weather and warmed by the mild coastal winds.”
The higher up the hill we climb, the more stunning the views, looking down to the winding medieval streets below and across the valley to limestone cliffs hanging above red-tile roofed houses and never-ending tumbling terraces of lemons. I can’t help but wonder how any work ever gets done up here, it must be too tempting to sit under a tree and daydream about all the wonderful dishes to be cooked with lemons.
I take home a jar of lemon honey and a bottle of limoncello, the sweet lemon liquer which is the signature drink of this region, to bring a little Italian sunshine back to Scotland.
In this corner of Italy, food is never far from your mind. If you’re not looking for a café to serve the perfect mid-morning cappuccino, frothing with hot milk and dusted with chocolate, it’s the ideal lunch spot (with tables preferably outside in the sun) or the best restaurant for dinner.
Tonight I’m going to one of the hidden gems of the Amalfi coast to eat, the tiny village of Atrani. Only about 100 locals live here, tucked away under the cliffs, just a short walk from Amalfi. Before we eat there’s time for a stroll to the small piazza and a look around the tangle of whitewashed alleys. Then we head down to the waterfront to dine on fresh seafood and delicious pasta, washed down with local wine.
The next day we drive south to the town of Serre, in the hills looking over the Gulf of Paestum. On the outskirts sits the 16th century sanctuary of Madonna dell’Olivio, a holy place which takes its name from the olive groves covering the surrounding countryside. We stop to visit one of the family-run groves which rather unusually specialises in producing olive oils from one-type cultivars.

Paradise for foodies, this means cooks can buy different oils, rather than one mixed with different olives, from spicy and fruity, to bitter and sweet.
The trees here are 200 years old and the olives they produce make oil which is sold from Europe to Japan. If you want to check just how pure it is, follow the individual code on the collar of each bottle, check on the company website and trace the original olive grove the oil came from.
Another gastronomic highlight of Campania is buffalo mozzarella, first produced back in the 10th century when water buffalos were introduced to the region. The thick slices of the cheese we have for lunch, served with smoked ricotta and pickled pumpkin, prove that 11 centuries later, it’s still going down a treat.
Late afternoon, when the sun is starting to dip, is the perfect time of day to explore the ruins of the huge Greek temples at Paestum, surrounded by fields of long grass and fragrant wild flowers.
A UNESCO World Heritage Site, the city was founded in the sixth century BC, before the Romans took over 200 years later. Water-logged marshland turned the area into a breeding ground for malaria, and it was deserted until a road was built in the 18th century and the area cleared.
The Neptune temple is arguably the best preserved Greek temple in the world, with only parts of the inside walls and roof missing. Tracing the outline of rows of houses and shops from the stone remains and what’s left of a Roman amphitheatre, it doesn’t take a massive stretch of the imagination to imagine what life must have been like in the bustling city.
For stunning scenery to rival anywhere else in the Mediterranean, we head deeper into the Cilento and Vallo di Diano national park. From the limestone massif of the Alburni mountains to the Infreschi coastline, it is covered with beech forests, dotted with medieval towns and villages. Within the refuge of the park is the largest otter population in the country and the mountain crags are patrolled by circling falcons and eagles.
We take a picnic lunch with fresh cheese, bread and wine – and a little bottle of limoncello to toast Luigi’s luck at being born in such a wonderful landscape.
www.jollyhotels.it
www.hotel-stella-maris.com
For further information about Campania, log on to www.italiantourism.com or visit www.cilentonaturaltravel.com.