You are at Home Devon 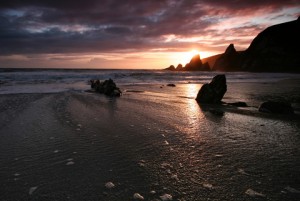 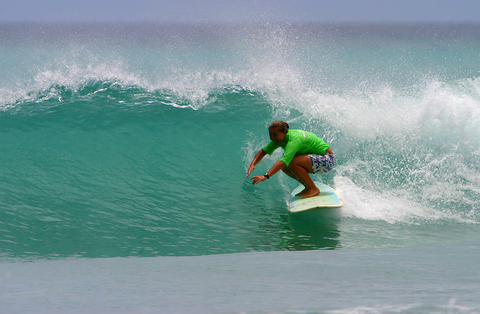 I TASTE cold salty water as a froth of waves engulfs me and all I can see is bubbles and a thick blue board bobbing above my head. As I bump my head on the floating board, I struggle for breath and I’m washed ashore like a piece of driftwood before being dragged out of the surf by a burly wet-suited instructor. But I’m not alone, the rest of my group is having just as many problems; apart from a 12-year-old girl, who has been standing up on her board like a professional since she entered the water, leaving the adults flailing in her wake.

Despite spluttering and choking up what feels like half of the Atlantic; my new-found sport is strangely exhilarating and invigorating and within minutes of the lesson ending; I’m signing up for more punishment the next day.

We’re on holiday in North Devon in a little surfers’ paradise called Woolecombe Bay but as we have two children under four, visiting this part of the world is not all about the surf. It is Daphne de Maurier country though – complete with beautiful cliffs set against rugged coastlines and miles of crystal white sandy beaches shrouded in romance and history but despite the Jamaica Inn vistas, there is still lots for small children to do here.

For a start you have the stunning beaches, which are not just well groomed as tractors clean and sweep them every morning, but dogs are not permitted on the areas set out for the holiday-makers; which is an obvious bonus for parents with youngsters.

We’re based just a stone’s throw away from the three-mile stretch of beach – our apartment in the Southover Beach complex overlooks the bay – which is an ideal location when you have two little ones who just want to build sandcastles and destroy them with their diggers and bulldozers on the beach every day.

We discovered our state-of-the-art accommodation after a recommendation from the local tourist board; this is the best place to stay in Woolecombe. The luxury of five-star quality was the promise and it more than lives up to the rating; it’s almost too good for two little ones who have half the beach stuck to them every day. But we needn’t have worried as the complex has a wet room (and steam room for the adults) to shower the day’s debris off before you step into your immaculate holiday home.

The little town of Woolecombe that has grown up around the bay is geared completely for tourists and surfers; jam-packed with shops selling little more than newspapers, beach balls, buckets and spades and sugary sweets. The beach-side cafes sell fish and chips, ice cream and warm scones and cream; the pungent smells invoking happy memories of childhood holidays in seaside towns. We love it here – all for different reasons and within a couple of days have settled in to a life on the beach; munching on hot chips and rolls for lunch and going for strolls with the children in the warm summer evenings.

As the weather in this part of the country is a lot hotter than during a Scottish summer, it’s hard to believe we’re still in Britain – but just as we begin to relax into the idyllic blue-sky days; the rain comes. But that doesn’t stop the fun as we head to Dinosaurland in Combe Martin; a half-hour’s drive from Woolecombe.

We stop in the neighbouring town of Ilfracombe to buy waterproof jackets as the rain has reached monsoon proportions and after wading through the rivers running through the streets, we find cheap rain-macs and head to the adventure park.

The park is designed very well; there are loads for the children to see and do – plus there’s also a zoo with wolves, monkeys, sea-lions and falcons. The only problem is that it’s clear they don’t get much rain down this neck of the woods because they are just not geared for it. There’s not enough shelter to see all the attractions and stay dry at the same time, so we spend four hours watching sea-lion shows, eating lunch and watching howling wolf packs in the pouring rain. It’s still worth a visit though, the children are not particularly bothered by the rain; loving jumping in deep puddles and splashing each other and us, but if I was going again, I’d rather go on a dry day.

By the next day, the summer torrential rains have ceased and it’s blistering hot; so we, along with several other hundred surfers and families, head for the beach. And although the beach is a hotbed of activity and fun; it doesn’t have that too-close-for-comfort feeling that you get when you’re holidaying abroad. Perhaps it’s the British manners or the fact that the beach is massive, but there’s room for everyone.

Woolecombe is also blessed with decent eateries; all welcoming small children (even pets) and most have an impressive view of the sea. We find that it’s best to eat out at lunchtime as most of the restaurants close at 5pm and don’t re-open till 6.30pm; which is just too late to feed hungry tots.

Beachcombers and The Boardwalk, both based overlooking the sea, do great simple, child-friendly meals; without scrimping on quality or portion sizes. The food in both places is not overpriced either; they surprisingly don’t stick on charges for that sea-view. 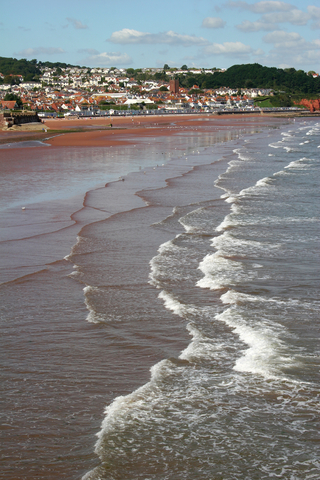 On the two other showery days we have, we take the children to Diggerland; just 15 minutes from Exeter and Watermouth Castle Family Theme Park in nearby Ilfracombe.

At Diggerland, they are enthralled with the JCB, tractor and jeep rides. It’s a park that’s being developed slowly, but what they have here is perfect and has everything for youngsters; no matter what sex.

In fact, it’s not just the children who love it here as we find we’re standing in relatively short queues behind couples and eager dads all chomping at the bit for a go at digging the earth; leaving mums to hold the babies and the video cameras. At only £12.50, you’re allowed unlimited access to all the rides, which makes for a full and value-for-money day out. I just hope they bring their idea to Scotland; I know it’s a place we could easily visit again and again.

And at the Castle Theme Park it’s jam-packed with things to do – almost too much to see in one day. There’s Gnome Land, Adventure Land, Merrygoland, Dungeon labyrinths and Castle Treasure, it’s around £10.50 for adults and £9 for children.

Woolecombe is a perfect place for a quiet safe family holiday, especially if you’re looking for fun places for the children to visit and long sun-soaked days spent on clean sandy beaches. But it’s not just for the two-point-four-children brigade.

It’s a lovely romantic setting for couples (my parents honeymooned in Ilfracombe more than 50 years ago) because of the beautiful views on those long sandy beaches and stunning sunsets. And now that flybe are offering cheap flights between Glasgow/Edinburgh and Exeter (we were just £24 return plus tax); the Devon and Cornish coast is within easy reach for Scots for long weekends as a relaxing alternative to a city break.

Plus if your other half is sporty, they are bound to want to try the surfing which is a lot more pleasant in the warmer southern waters than the North Sea.

Once you’ve discovered this part of the country; you’ll be keen to go back for another look. A week’s not long enough to uncover the gems this little slice of heaven has to offer and you’ll leave with fond memories and a longing to go back. In just a couple of hours, you can be in a world of sun, surf and charm for a fraction of the price of going abroad. But don’t tell too many people; it’s still one of the UK’s best kept secrets and I’ve got a sneaky suspicion the locals would like to keep it that way. So let’s just keep it between ourselves, shall we?