This year we are determined not to spend longer than necessary at King Towers in fear for our very sanity.

So first off was a trip back home to Edinburgh and my parents. God Bless Gaga and Grumps (don’t ask!) The two girls were having such a great time – they didn’t want to leave – so they didn’t – literally. Good old Gaga (aka my mum) said they could stay which left us with only our two-year-old tiny tearaway – how much trouble could that be?

After a mini-reunion at yummymummybeauty HQ – we snuck back home, car laden with a selection of my childhood toys my parents had kept in their ‘black-hole’ sized vault or loft as it is generally known. Normally the wee one is fairly well-behaved. And initially he was an angel. 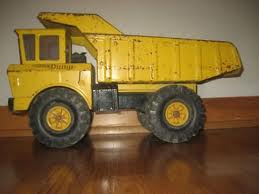 – although it took him sometime to realise that they were just toys – and didn’t actually move, talk, spin or any combination of the above – by themselves. After a couple of hours he gave up asking to “ go to the shops – need batteries.” (No we actually played with toys that didn’t really do anything but were thankful. Now if a car doesn’t start break-dancing to Gangham style with the flick of a switch, kids think the toys are broken…)

Anyway, I introduced him to one of my all-time greatest toys – my yellow Tonka Toy truck. Boy were those things build to last! It is a solid piece of engineering and that may have been where the problem began.

Then it all went horribly wrong. Pins and needles started to set into my aging limbs so I moved to sit up – not entirely an easy job in skinny jeans I tell you. As I did I saw a blur of yellow before my eyes and then “CRACK”. My mouth came in contact with Tonka truck with a deafening crunch – as the wee one boldly shouted “rocket”.

My mouth felt funny. There was a metallic taste and then I felt all these sharp ‘bits’ in my mouth. I leapt up and ran to the mirror. The horror that confronted me was never to be forgotten. The little nipper had taken half my front tooth out. Totally smashed it. Pulverised to a bloody stump. I screamed – literally.

Now I admit I am vain. And I always thought my smile was my best feature – so to look in the mirror and be confronted by Steve ‘Hill-Billy’ King was just too much for even me. My other half thought it was funny – oh yes – very funny.

You’ll see from the picture how it looked once I had picked all the bits of broken tooth out my mouth and stemmed the bleeding.

Emergency call to the dentist – pleading for an appointment and fast forward four hours and I had a temporary ‘tooth” covering the stump!. 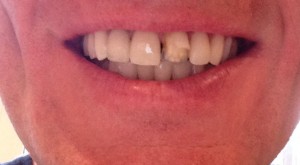 The replacement crown would take two weeks to make and would set me back £850! No, you read that right… £850.

Twenty minutes after leaving the dentist I was in Waitrose with the wee one. He was firmly lodged in the trolley seat and I was passing him things to put in the trolley as is our normal routine. I was very self-conscious about my mouth and kept looking in every reflective surface I could find – no mean task in a supermarket, I will have you know.

I passed him two tins of tuna. He dropped one. I bent down to pick it up and as I started to stand – “CRACK” he dropped the second tin of John West Tuna in Spring Water directly onto my face and the little blighter had done it again. He’d not only managed to remove the temporary tooth (which I was assured would stay on until it was taken off by a dentist) but also removed a further chunk of my stump!

In shock I desperately tried to stick the tooth back on – like that was ever going to work. The staff at Waitrose rushed to my aid. I tried to speak with my mouth closed to spare them the horror of speaking with Bucky Beaver. Obviously it didn’t work and by the looks on their faces I could tell it wasn’t a pleasant sight.

So, 35 minutes after LEAVING the dentist I was back AGAIN. This time no appointment. This time close to tears. This time clutching the “Tooth-inator” in my hands who thought this was a great game and who kept repeating “Daddy look silly. Daddy teeth broken. Me make it better.”

The long and the short of it, is that I now have endured the two-week temporary temporary (if you get my drift) and have had the tooth replaced with a porcelain one. Not a bad job as you will see!

The Tonka Toys are now in our loft.

Note to all other parents – die-cast solid metal toys from the 1970s were built to last and to destroy… literally. Banish them immediately. You’ve all been warned.

We’re off to Alton Towers for a couple of days next week. God only knows what trouble I’ll get myself into there. But keep reading and you’ll be the first ones to hear about Dishy Daddies Misadventures!

Thanks for laughing by the way…. glad you can all smile with a full set of your OWN teeth! And thanks for all the follows on TWITTER @findstevek – been over-whelmed.