Batten the hatches folks – we’re in for a bumpy ride… Santa’s on his way!

Well maybe you’re not – but at King Towers (renamed – The Grotto) for the coming weeks – it’s full steam ahead. We’ve be-dazzled every surface, affixed thousands of lights to six – yes you heard me correctly – six Christmas trees, planted enough garden Festive Decorations to satisfy even the fussiest Santa and totally got the neighbours talking already about how ‘Over the top’ it all looks.

But it is catching – the neighbours across the road, the second our 10 foot outdoor tree was erected, promptly stuck out their new illuminated reindeer and sleigh combo. It’s contagious I tell you. Our oldest must think my head buttons up the back (in the words of my dearly departed Gran) – she’s suddenly become very helpful and taken us aback by ‘offering to help’ – without prompting. I’d like to think it was out of the goodness of her heart, but I fear it has more to do with the request for a blue iPhone 5c from Santa!

Taking her up on one such moment of madness. I asked her to help me do the on-line supermarket shopping. A simple task, but one I hate doing. We had three to do. The weekly shop and two pre-orders from M&S for Christmas – those delivery slots are harder to come by than finding a Panto without a reality TV star in the lead – let me tell you.

Three- days later I heard the distinctive rumble of the lovely man from Waitrose. A second later the bell rang and he gave his usual cordial greeting. Now the thing I like about Waitrose is the way they colour coordinate your shopping and pre-sort it so you know where it all goes – fridge, produce, store cupboard etc – added to this they actually bring it into whatever room you want, rather than dumping it on the door step.

So, I hear him mutter something about it being a “big shop’ this week, but get on with containing three kids and a dog in the lounge while he dutifully brings the shopping into the kitchen. Ten minutes later, I glance out he window and he’s still at it.

I walk out of the lounge and almost collapse in a heap in the hallway. I did actually swear – but let’s go with the abbreviation WTF for now.

The kitchen was like a supermarket trolley dash. Bags everywhere, no floor space, no surface space, no space at all in fact. Trying to remain calm. I opened the nearest bag to me and peered inside. I didn’t remember ordering quite so many Moshi Monster Frubes, but I checked the next bag and was greeted by an EU cheese mountain of mozzarella.

Alarm bells ring. My heart rate increases. I immediately think – ‘something’s gone wrong here’ – don’t panic. It must be a genuine error. So the little man finishes and hands me ‘The List’ and adds: “There were no substitutions this week”. I glance at the list. It’s row upon row of 11 x this and 11 x that…. 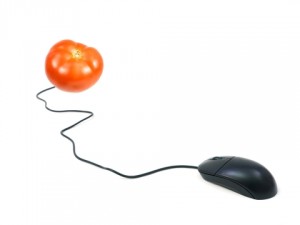 Then a slow realisation takes over. Our eldest had done the ordering. I hadn’t checked. My Debit Card is stored and the payment would go automatically… It turned out she was had been a little heavy-handed (and or careless) on the number ‘1’ button on the computer. I found this out as we went through the process in detail and this time I watched her. Those little boxes with the quantity number in them – aren’t always that clear and take a second to update. She was happily banging it without a care in the world.

The result was plain to see. Our freezer is now full. Our spare freezer is now full. The neighbours we do speak to (bribed by two fresh chickens and a gammon) also have a freezer full of our stuff. And to add insult to injury, I remembered I had two other lists already ‘ordered’ – so we checked and sure enough – it was the same story there. I know we all like to over-indulge at Christmas – but 11 Butter-Basted Stuffed Turkey Crowns serving 10 people…. Thankfully I remedied that with a few clicks on the mouse of my own.

Warning to you all – check your online order BEFORE you send it and think twice about letting one of your kids ‘help’! Before I go (and eat) I want to say a couple of things.

Firstly – Have Very Merry Christmas and a Prosperous and Wonderful 2014…

And secondly don’t stress about putting on a few pounds over the Festive because in the New Year, we at yummymummybeauty.com have come up with a great new columnist for you.

He’s my very own personal trainer and weight-loss guru to the stars – Ollie Lawerence. He’s going to give you all the info you need to drop those pounds and shape up in the New Year.

Look out for his brilliant new column starting in January!