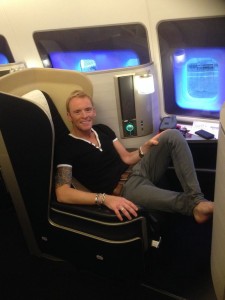 Oh the joys of Spring are among everyone here at King Towers. The kids have all sprouted another few inches and that’s meant another second mortgage to re-kit them all out. Seriously, we have the Ugg Store on speed dial. And we’re on first name terms with all the staff at H&M!

How did you all cope with World Book Day? Oh the drama that caused here.

I asked our seven-year-old to get a book ready and down she comes with 50 Shades of Grey. I immediately snatched it off her and said: |”Oh no darling that’s not a good book.” to which her reply was: “Well, that’s funny because Gagga (aka my mum) couldn’t put it down.”

We settled with Harry Potter in the end and she went as Bellatrix LeStrange. Won first prize in her year – not that I’m bragging of course!

So, I promised you I’d tell you all about my Russian adventure. First time in two years we’ve been anywhere without the kids in tow. Let’s just say, Russia in the depths of Winter at -35 degrees isn’t exactly a long weekend I’d repeat anytime soon. 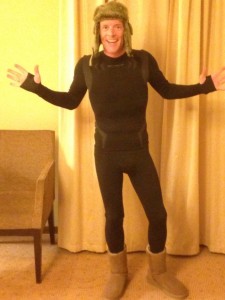 We left at some ungodly hour and were at Heathrow at 6.30am after our shuttle flight from Manchester. Then the real spoiling began. Not sure if it was the carb-over-load (needed to be forcibly removed from the pastry section in the British Airways Concord Lounge) – but I felt like a 12-year-old on their first flight.

We were the only two passengers in the First Class section (he drops in subtly) of the British Airways 747 and it felt amazing. Four cabin crew – all for us – who offered us pyjamas, slippers, toilet bags, feather duvets and pillows – it was AWESOME.

In fact after a four-course breakfast, including Caviar and fillet steak, I actually went to bed, PJ’s, duvet the lot and only woke up to the gentle sounds of my name being called by the steward.

And then 45 minutes later I was waiting in the mother of all Passport queues with people carrying crates of chickens – kid you not – welcome to the Soviet Union. Three and a half hours later – we made it to the outside world. And that was just trying to get into the country.

Now me being me, I said: “Oh we’re not taking a three-hour taxi ride to our hotel, (the traffic in Moscow is notoriously bad), we’ll take the train to the main station and then take the Metro.” I’d been to Russia before – okay in the old Communist days when I was 16 – but I professed to be an ‘expert’. 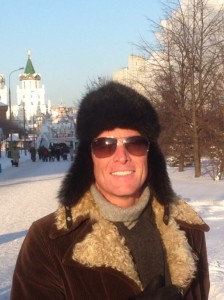 The train part was fine. It was the Metro that nearly had us deported. Now I sort of forgot about the fact we had all that luggage. Anyway we crammed into the carriage – suitcases taking up so much room, to the bemused stares of the Russians – 99% of whom were bedecked in furs.

We get to the station we need to change onto the next line. Doors open, we tip out. Then it took us an hour to walk to the next metro line. Endless miles of tunnels, no blasted escalators, just sweeping staircases that seemed to go on forever.

We finally get to our stop and by now its the height of the Moscow rush hour.

When I say thousands of people I mean that.

Then we hit a ‘traffic-jam’ It looked like thousands of people standing still. And they weren’t afraid to point at us, laugh at us and I suppose we did look ridiculous. Thirty minutes of shuffling later, we glimpsed salvation – and an escalator – just the one of course – but none the less a Godsend.

We get to the bottom after ‘missing’ several opportunities to jump on – those Muscovites are a pushy bunch! Luggage piled high – my other half in front luggage between us and me on the lower step. We chugged slowly but surely towards what looked like daylight. And then it happened. The rickety old escalator jolted to a halt and the precariously balanced Louis Vuitton (think Elton John on a months stay) toppled. It swayed at first and I tried to steady it, but it was no use. Down it came, knocking me off my feet, taking four other innocent bystanders with me and and down I went in a sea of Louis Vuitton. 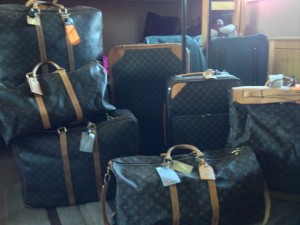 I seemed to tumble for minutes but it was seconds. However, as I regained my composure (not my dignity) I glanced up and it looked like a tornado had cut a swathe through a small village. Carnage. There was shouting, fist shaking and all I could do was say “sorry”.

By this stage a riot was brewing and some passengers had opted to clamber over me, the luggage and anything else in a bid for freedom.

It took us 45 minutes to collect the luggage and make it to the top of the ‘escalator’.

But I was still buoyant. It said the lovely Hilton Hotel was a mere 100m from the Metro Station. What they failed to mention was that it was as the crow- flies and forgot to say you needed to cross and 8-lane expressway – with no pedestrian crossing! And there was about three feet of snow to boot.

It took us another hour to navigate the road, one bag at a time and back and forth…. but we made it and we were alive. The hotel was exquisite. The suite huge. But boy were we aching. A trip to the hotel spa would sort us out. We headed down.

Mistake one: When in doubt and signs only in cyrillic Russian – ask!

Bold as brass in I walk to the ladies changing rooms. The attendant actually screamed and shoo-ed me off with a brush! A simple “Lady’ symbol on the door might have helped. 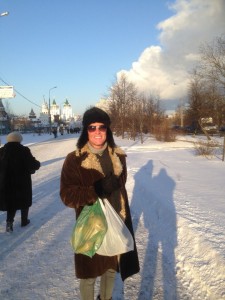 Mistake two: Russian men haven’t heard of swimming trunks – or indeed of the need for personal space when in a state of undress.

In I go, wearing swimming trunks – and the whistle goes – much pointing and gesticulating and the part of the Russian weight-lifter type attendant and it dawns – you can’t wear trunks!

By this stage I was too embarrassed to do anything but whip off the trunks and go commando. The pool – separate for men and woman I add – wasn’t busy – but Christ it was cold. If you get my drift – honest! Next came the Russian Massage from some bulky, brute called August. Within ten seconds I was wishing I was back in the Metro hell of earlier.

I was bent, twisted, pummelled and ‘beaten’ within an inch of my life. At one point I actually tried to indicate it was very sore. The reply a great big meaty hand on the back of my head and a less than gentle ‘Shove’ back into submission. Never again. My shoulders were actually bruised.

The rest of the trip went relatively smoothly. Apart from me having to ration my coffee intake. £8 a cup… It’s a seriously expensive city. SO much so that dinner out cost in excess of £150 for two – every time! And those dreams of buying Russian Standard Vodka as presents soon vanished when I did the maths. A 750ml bottle in a Moscow supermarket was £5 more expensive than a litre bottle in the Co-op back home.

Anyway, it was an experience. We survived. The kids had a blast being spoilt rotten by my parents and we made it home in one piece.

Would I go again?  Probably not – and definitely not in the depths of Winter. Never seen my breath freeze as I exhaled and form tiny ice crystals!

Anyway onwards we go – it’s but a distant memory now. Roll on Summer and our Family trip to Mexico… can’t wait – on second thoughts – with my luck – who knows?

And thanks for following me on Twitter – @findstevek – 300,000 followers – just call me Katy Perry (well hardly) but I do appreciate each and every follow!