How are you all? Don’t you just love the way we look? By that I mean the site and not me personally! Hope you’re loving the re-design. I certainly am.

Feels like a long time since we have spoken. Life here at Kings towers has been hectic – when is it not? We survived Halloween only just! More about that later.

Don’t know what is about this time of year, might be the weather, or the fact that I’m getting closer to being another year older. Before you continue reading, I should point out that the following section may upset some of you of a nervous disposition. So if you’re nibbling on that piece of carrot cake or pretending not to eat those chocolate digestives (yes we all do it) I suggest you stop now. Not for the sake of the calories I hasten to add, but rather that you may find the following slightly upsetting.

Been having a few problems with my stomach. See, that got your attention. Bet you’re already wishing you had put down those chocolate biscuits! Anyway, I needed to go to hospital to have a Gastro endoscopy procedure. Now, me being me, I had to schedule it so it fitted between school runs, writing, and 1 million other things that come with having three children, with three schedules, three sets of friends, and three very busy lives. I elected not to have the “twilight sedation” and decided I was man enough to handle any procedure.

The day comes, I turn up at at hospital, and I appear to be the only person present waiting on the procedure who has elected not to have the sedation. Anyway, I have a brief chat with a nurse, I then meet the doctor who would be performing the endoscopy . She’s ever so sweet. Very pretty. Probably 13 or 14 by my reckoning but nonetheless, she seems to know what she is doing. I get asked to follow her into the procedure room and to lie on a table. Well, when I say table I mean in a hospital bed obviously. The room is quite dark and there are three nurses present. 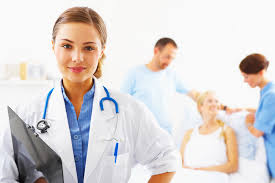 One of the nurses repeats the now immortal words “don’t worry it doesn’t take long and it’s just like swallowing a sweetie.”

Next thing I know I have what can only be described as some S & M style mouthpiece shoved in between my lips. By this point obviously I can’t talk. All the time this is happening, the pretty young doctor is talking non-stop. Next thing I see is she has what can only be described as a garden hose. It looked exactly like the one I recently purchased at’s B & Q. I kid you not. It was exactly like a garden hose. Realisation suddenly kicked in that this was the “small hose” which was going to pass down my throat and into my stomach.

The young doctor explained she was about to start the procedure and before I knew it, I could see the hose looming in front of my eyes. I should also point out that prior to all this one of the nurses had given me two sprays, of what can only be described as a peppermint mouth spray, which was apparently a local Anaesthetic.

So the doctor begins, I feel the hose in my mouth and then my next reaction is – excuse the pun – a gut reaction. I lash out with my feet as I struggle and gag. In some sort off primordial outburst I manage to lift my leg a good three feet off the table and connect my pointy Dolce & Gabbana ankle boot directly into the nose of the nurse who was standing behind the doctor. There is an audible crack. And then a muffled cry.

Turns out I’ve lashed out and not only kicked the nurse in the face but proceeded to break her nose. However, the procedure was 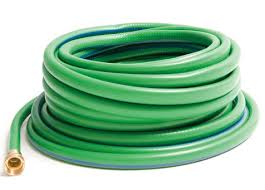 completed. Lessons learned? One: always have sedation when it’s offered. Two: nurses should never stand within kicking distance of a patient who is not under sedation.

With no assault charges pressed. I made my way home and spend the rest of the day feeling rather sorry for myself. I’m sure the nurse felt the same.

Barely 24-hours’ later it was Halloween.And boy were the kids excited. We always tend to go a bit overboard in this house when it comes to dressing up. Costumes had been ordered. Make up selected. We even all had inflatable wings. These were really cool even if I say so myself. Basically, you strap the wings onto your back and then attach the Control Panel to your belt. When you knock on someone’s door to trick or treat, you simply press the button and a little motor kicks in and inflates the wings to a massive 60 wingspan. Very impressive. Definitely the best costumes in our street.

My costume on the other hand was slightly different this year. I decided it would be a great idea to go as a skeleton. No I didn’t dress up as Victoria Beckham. I went instead for one of those Morph suits. Now for those of you who don’t know what these are, they’re basically an all in one (and by that, I mean it covers everything including your feet hands and head and is fastened with a zip straight up the back).

It took me about 15 minutes to squeeze into the skin. Our eldest zipped me up and I could already tell by the look on her face, that the suit was definitely a little tight in places! I think you get what I mean. Undeterred by the pressure of the suit on certain areas of my anatomy, we set off.

Thankfully it was dark and the base colour of the suit was black. It was only the skeleton bones that glowed. However, what I hadn’t banked on was the fact that it was fairly difficult to see out of the complete face mask section while walking in a dark street. I stumbled a few times and then realised that I was going to have to be extra careful but when you’re running after three excited children that can be quite difficult. 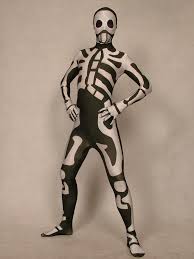 After about 45 minutes the buckets were filled with all those sugary treats and we decided to head back in the direction of our home. The kids were giddy with sugar – strike that actually they were high on sugar – and I was basically just feeling “pinched”.

Anyway rather than take the long road back home I said we should cut across a small park. By this stage I’m just desperate to get home.

I didn’t bank on the two elderly dog walkers getting in between me and a warm house. Chasing after the kids I failed to see them and went head over heels, tripping over their small dog and pushing them both to the muddy ground. Kids thought it was hilarious. I didn’t. Neither did the two dog walkers… bet they will re-think going out on Halloween Night after being knocked over by a speedy skeleton.

You’ll be glad to know I made it home safely and that my man bits survived the ordeal.

Thankfully Guy Fawkes’ night went off without a hitch. It was as it always is similar to most parents’ sex lives (I know I’ve used this before – but it’s still true). A few short bangs, a couple of damp fizzles followed by a few stars in the sky.

Until we speak again. Be safe. Get out Christmas shopping done – not to brag – but we’ve finished!