You are at Home Skye 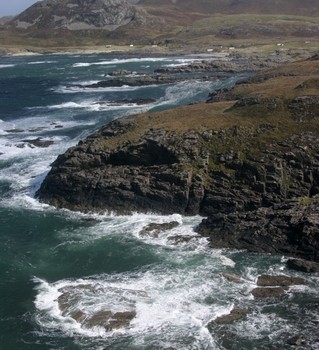 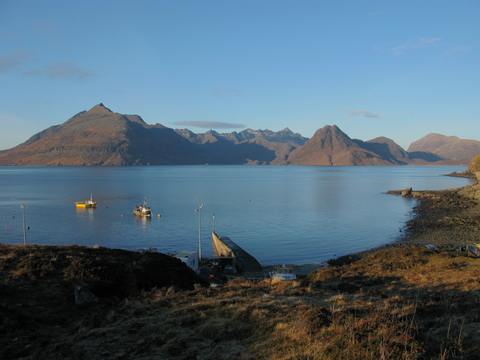 The sun is only just making its first leanings towards the west when we set off from the car park at Orbost. There’s not a cloud in the sky and we can’t have asked for better walking conditions.

On a day like this, nothing beats the Scottish countryside. With our luck well and truly in, we’re making the most of an afternoon in the great outdoors.

After dense woodland, thick with towering pines, the trees thin out and the track picks its way uphill until we come to open moorland. On the other side of Loch Bracadale, there are a few clusters of farmhouses, clinging together when they have to brave the onslaught of winter storms. But today they’re basking in the unseasonable sunshine along with the rest of us.

For experienced walkers, there are endless days to be spent navigating the Cuillin Hills, their jagged volcanic peaks rising Mordor-like out of the belly of the island. We head to the west of Skye to meet Ian, our guide for a walk out to Idrigill Point. It’s a corner of the island that’s fairly well off the tourist trail and the only company we have on the way are occasional sea eagles, gliding effortlessly on the thermals.

For anyone who wants to get out into the hills, but isn’t confident with a map and compass, it’s wise to hire a guide. We know we’re in good hands when Ian tells us about his years as an army officer. Mind you, the only survival techniques we’re hoping to need are a hot bath and restorative gin and tonic in the pub tonight.

If fans of The Clash like walking, this is where they should come because part of the Idrigill forest land contains Rebel’s Wood, a sweep of more than 2000 trees planted by fans of Joe Strummer in his memory. 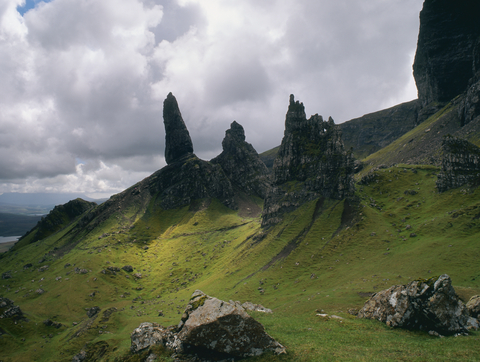 Concerned about carbon emissions from tour buses and the pressing and distribution of CDs, he helped set up environmental charity Future Forests to encourage people to plant trees to compensate for the pollution they cause. This pocket of land, looking out to sea, will be his permanent epitaph.

You need to have a head for heights to look down at MacLeod’s Maidens, the furthest point we reach. It’s a sheer drop to the waves smashing and whirling against the craggy cliffs. We could easily linger longer, sitting on the rocks with the sun dipping below us. But we want to get back before dark for that well-deserved drink.

We’ve reserved the next day for indulgence, but first manage to squeeze in a short walk around the ruined grounds of St Mary’s church overlooking Dunvegan and up the hill to the Duirinish Stone. There’s barely a ripple on Dunvegan Loch and the flat tops of the MacLeod’s Tables hills are reflected in the water.

With an appetite worked up, we jump in the car for the drive around the coastline to Colbost and a lunch appointment at the Three Chimneys. What can you say that hasn’t already been said about the food, service and atmosphere at this award-winning restaurant? Oozing with effortless style, it doesn’t fail to disappoint, from the mouth-watering cured organic salmon, served with beetroot relish, to the roast cod in Arisaig mussel and herb broth and the kitchen’s signature dessert, hot marmalade pudding with Drambuie custard.

With the freshest of ingredients right on their doorstep, it’s incredible why so many eateries in the Highlands and islands still fail miserably to offer a decent menu. Maybe the Three Chimneys should offer a masterclass to new chefs.

After lunch we head back to Dunvegan for a look around the castle, the seat of the MacLeod clan since the 13th century. The fortress which stands today, surrounded by well-manicured gardens, dates from the 1840s and includes the tattered remains of the Fairy Flag. It once belonged to Norway ’s King Harald Hardrada, but when he died in battle in was brought to Skye by his Gaelic boatmen and the fairy legend began. The MacLeods say the flag was a gift from the fairies, blessed with the power to protect the family in times of danger – and it still works today.

On our last day we drive to Elgol and take one last look across Loch Scavaig at the mighty black Cuillins. The single-track road twists and turns across the moorland, occasionally blocked by a herd of sheep. Highland cattle look up from their grazing, peering through long caramel-coloured fringes at the traffic jam.

It’s no surprise so many artists have made their home on Skye, surrounded by such jaw-dropping, and constantly-changing, scenery. Every time the cloud breaks, shafts of sunlight beam down onto green hillsides, then twirl and disappear.

Potters, jewellery-makers, artists and photographers have studios dotted all around the island and they make interesting souvenirs to take home. They’re worth a visit for the drive alone through that inspiring countryside.

It might be the biggest town on Skye, but the harbour at Portree is like a miniature Tobermory, all pastel-painted cottages lined up along the quayside. Fishing boats still land their catches of crabs, lobsters and scallops here, before they head off to dinner plates around Europe. And there’s a friendly feel in the streets around central Somerled Square , where many visitors to Skye make their base to explore the island.

Around the bay from the harbour there are even more cracking views of the Cuillins, so hard to pull ourselves away from we’re almost tempted to stay another day.