You are at Home Toy exchange 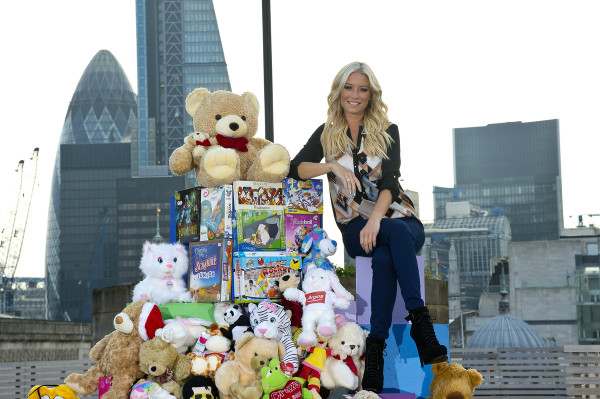 Radio presenter and mum of one, Denise Van Outen has teamed up with the UK’s number one toy retailer Argos and children’s charity, Barnardo’s to mark the annual Argos Toy Exchange campaign. The project aims to raise money for the most vulnerable children across the UK.

With more than 70 per cent of parents donating unused toys to charity, the Toy Exchange is the perfect way to clear out old toys and make space whilst supporting a hugely worthwhile cause.

The study for the Argos Toy Exchange, reveals that 10 per cent of adults have kept toys from

their childhood because they are a comfort to them, no matter whether their children like them or not.

Childhood classics Lego, Barbie and Monopoly are the favourites of the parents’ generation with more than a fifth of parents keeping much loved toys to pass on to their own children.  The study reveals the top 10 toys from the past 50 years:

The current generation of children have on average 69 per cent more toys in their toy boxes than their parents did but, parents admit that their children only tend to play with less than half of the toys in their collection.

So what happens to the forgotten toys? According to the study of more than 1,000 parents of school age children, just under a third store them in the loft, attic or garage, while a quarter leave them languishing at the bottom of the toy box or back of the cupboard.

Amy Whidburn, Head of Corporate Responsibility for Argos, said: “Last year’s Toy Exchange raised hundreds of thousands of pounds in toy donations.  We are looking to build on this success by setting an even higher fundraising target of £1 million this year.

“As the UK’s leading toy retailer, we know the important role toys play in a child’s life especially at this time of the year.  By supporting the Toy Exchange Argos customers will be making a difference to the lives of the most vulnerable children across the UK.”

Argos customers are invited to drop off unwanted toys at Argos stores in return for a £5 voucher towards the cost of new toys (minimum £35 spend), to be redeemed at Argos by 24 December.  Donated toys are then passed onto Barnardo’s retail outlets where they are resold to raise funds for the charity.  The charity’s stores across the UK will also be accepting toys on behalf of Argos and distributing £5 vouchers to those who donate.

Denise Van Outen, who is helping to launch this year’s campaign, said: “The Argos Toy Exchange is a fantastic initiative! Being a mum myself I know how important it is that children have toys, not only to enjoy but also to help them learn and develop. As we start to think about Christmas it is the perfect time to help those in need. I urge families across the UK to get out to their closest Argos store and donate their unwanted toys.”

Gerard Cousins, Barnardo’s Director of Retail and Trading, said: “After the success of last year’s Toy Exchange, we are really excited about the potential that this year’s campaign holds and are delighted to be partnering with Argos again.  The initiative works well for us but its beauty lies in the fact that the concept is so simple.  All customers have to do to help the most disadvantaged children in society is donate their pre-loved toys.”

For more information about the Toy Exchange, visit www.argos.co.uk/toyexchange.